The threat of feral deer in Victoria

There are four species of introduced deer that are running wild across much of the Victorian Landscape.  The Victorian population is not accurately known;  however, it is thought to be up to 1 million.

What is known is the population is growing rapidly and spreading largely uncontrolled and unconstrained.

Sambar deer (Rusa unicolor) are the largest and most common species occupying 30% of Victoria, including much of eastern Victoria’s vast forested areas from the coast to the highest peaks. They were introduced as game for hunting in the 1860’s.

Fallow Deer (Dama dama) are the next most common wild species occupying 10% of Victoria. Fallow deer are largely grazers and are often found on the forest/pasture interface.

Red Deer (Cervus elaphus) occupy smaller isolated areas, in particular around the Grampians. Fallow and red deer in the wild were also released for game but deer farms escapes that occurred as the industry declined in the late 20th century has extended their distribution. 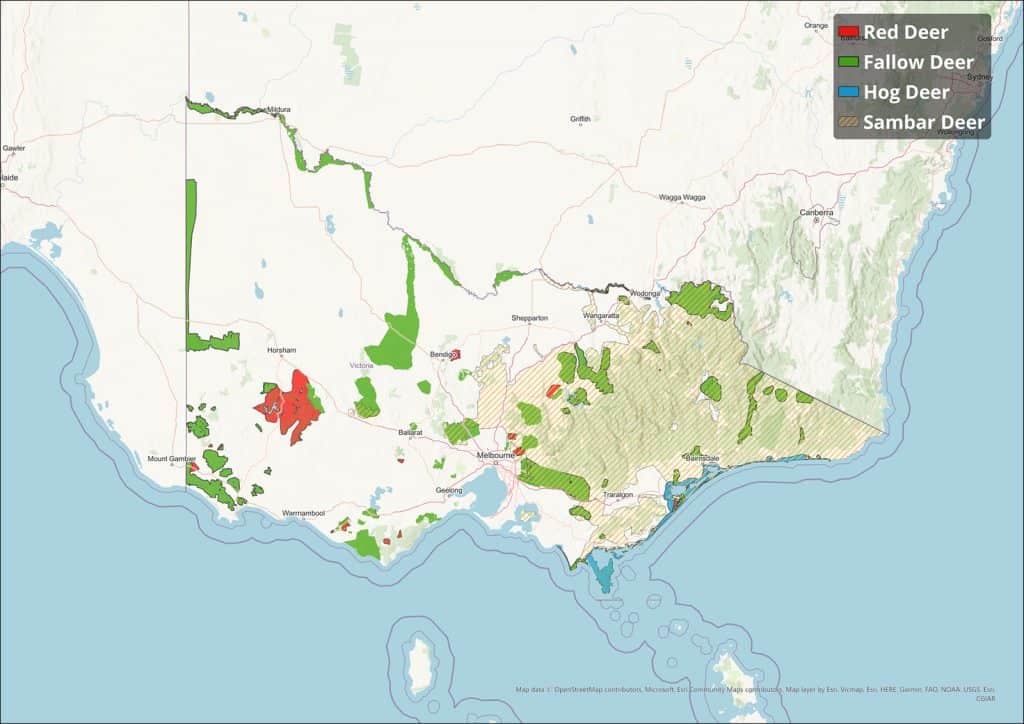 Distribution of feral deer in Victoria.

A small population of Hog deer (Axis porcinus) occurs along the Gippsland Coast. As these deer are an introduced species that now exist in a wild in an uncontrolled and unconstrained state, they are best described as feral deer. The impacts of feral deer on Victoria’s environment, economy and community well-being are widespread and serious. The impact of the four feral species in Victoria varies  due to differences in diet, size and habitat preference. These impacts are studied and presented in detail in a range of papers in our information and resources section.
Data provided by Alpine Environmental Science – February 2022 based on data from the Arthur Rylah Institute

Introduced deer species are important game animals in Victoria, but in some situations they can have negative impacts on agricultural and environmental values. There is concern that deer species are expanding their Victorian distributions through natural and human-assisted dispersal. Understanding the current distributions of deer species in Victoria will help inform their management. In general, preventing the establishment of ‘new’ populations provides a higher return on investment than eradication, and containment provides a higher return on investment than managing the impacts of widespread species. Understanding the distribution of deer species following their establishment would assist in the delineation of management areas. The Biosecurity Division of the Department of Environment and Primary Industries commissioned the Arthur Rylah Institute for Environmental Research (ARIER) to investigate the historical and current distributions of three deer species (Sambar Deer Rusa unicolor, Rusa Deer Rusa timorensis and Sika Deer Cervus nippon) in Victoria. All three species can be legally hunted in Victoria. Sambar Deer were introduced into Victoria during the 1860s and are widespread in eastern Victoria. However, the current status of Rusa Deer and Sika Deer in Victoria is unclear.

We know deer were released in Victoria in the 1860’s and small confined populations persisted for decades. This map is based only on formal records of sightings documented since the 1920’s.

Potential distribution of feral deer by climate in Victoria

Potential distribution of deer (six species), estimated using the Climatch algorithm. Dark red shows the areas where the habitat and climate is most suitable for one or more species of deer. Green shows areas less suitable for deer. Feral Deer have a significant impact on Victoria’s agricultural economy.  The high density of feral deer on and adjacent to farmlands is having a significant economic and psychological impact on farmers as many battle against feral deer.

Feral deer are a high and increasing risk to motorists and have invaded peri-urban areas both around Melbourne and rural towns causing damage to parks, gardens and impacting nature based experiences.

We acknowledge the First Australians and their elders past and present. Effective threat abatement in Australia will need to harness the deep knowledge and land and sea management skills of Indigenous Australians, and facilitate their meaningful involvement in decision-making.

The Victorian Deer Control Community Network is hosted by the Invasive Species Council.